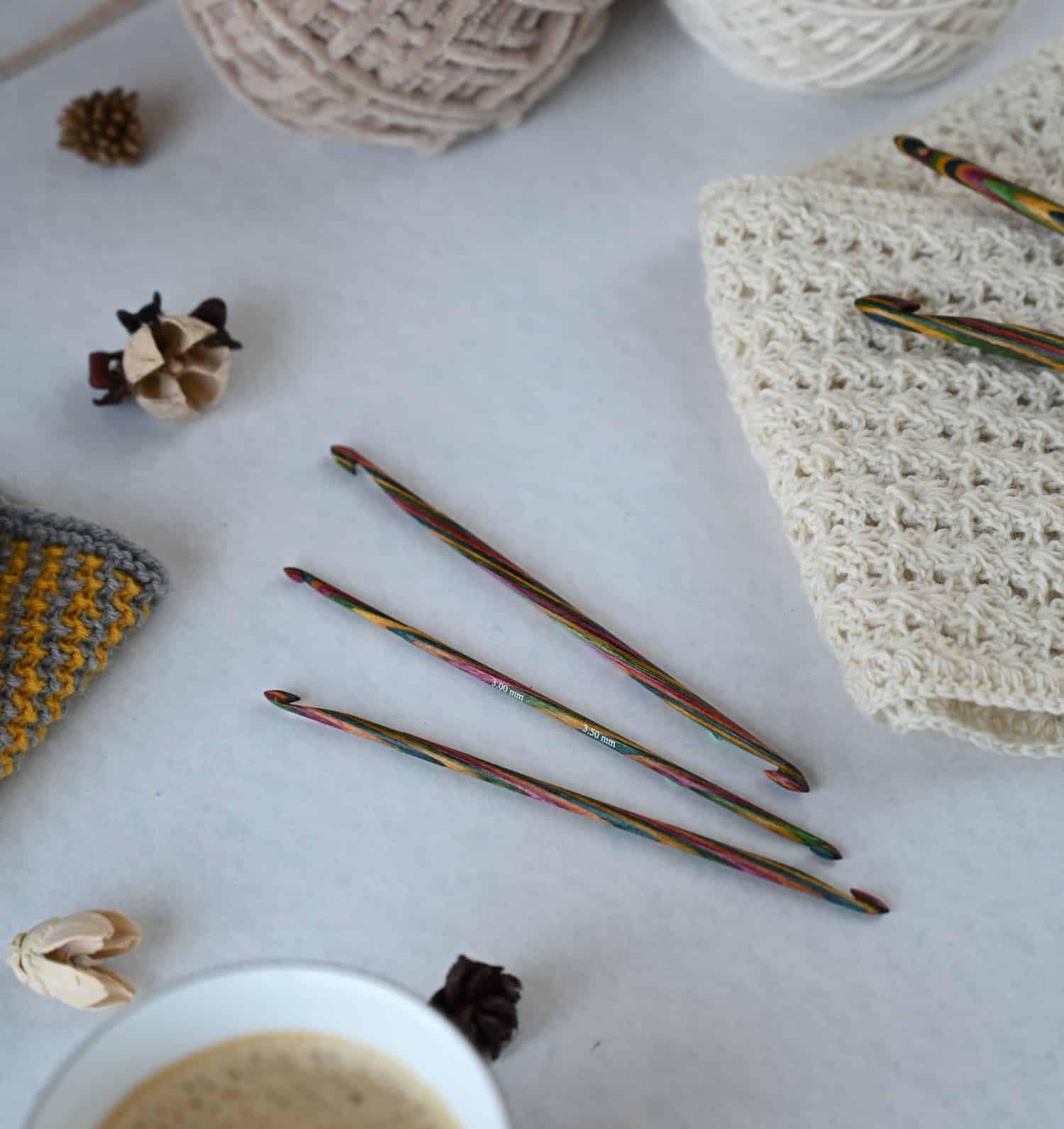 Tunisian crochet combines elements of both knitting and crochet.

While still a version of crochet, it creates a vastly different fabric than regular (or traditional) crochet. The result is a project that looks like it was created by knitting, but in fact is actually crocheted.

A row is completed in Tunisian crochet by working two “passes” (one going “forward”, then a “return” pass back). However, one regular row in traditional crochet would be counted for each pass.

A forward pass (abbreviated FwP) is where you pull up loops across your project. All the loops made during the forward pass will stay on your hook.

Work is never turned in Tunisian crochet, either. All stitching is worked on the “right side” of your project. However, in regular crochet, you work on both sides of the fabric, with only one stitch at a time.

The Look of Tunisian Crochet

Tunisian crochet mixes components of both crochet and knitting to produce a fabric that looks very similar to either something woven or a knitted stockinette stitch, depending on the specific Tunisian crochet stitch you choose.

Tunisian crochet makes a fabric that is pretty thick, and a lot thicker than traditional crochet or knitting. The consequence of that added thickness is that the fabric created is much less stretchy than when made with regular crochet or knit.

Tunisian crochet fabric is also prone to curling at the edges. This happens because you are always working from the same of your project. Some Tunisian crochet stitches curl more than others.

To mitigate the curling, you can try some of the following changes:

A special hook is used to create Tunisian crochet projects because you need room to hold the many loops of yarn that you’ll hold on your hook during each “pass”.

The sizes of Tunisian crochet hooks are the same as regular hooks. The US sizes still run from B to S, and the metric sizes start at 2mm and go all the way up past 12mm.

The hook’s shaft is elongated a few different ways:

The most common way a Tunisian crochet hook becomes longer is by simply extending the shaft using the same material that the rest of the hook is made of. These are called straight, or rigid Tunisian crochet hooks (Amazon Link), and are usually at least 10 inches (25 cm) long. Straight Tunisian hooks are good for smaller projects, like scarves or hats.

The second way of extending the hook’s length is by using a rope or flexible cord to connect the hook to the stopper at the other end. In some cases, you’ll come across hook sets that have detachable cords so that you can change the length or size of the hook (Amazon Link). These longer hooks with cables are used when you want to make a bigger project like a blanket or sweater.

A double-sided afghan hook looks exactly like you’d expect it to. It is longer than normal, just like a single-sided Tunisian hook, but instead of a stopper at the other end, it is another hook. (Amazon Link)

There are a handful of basic Tunisian stitches that everyone should know. Here, we outline the symbols that correspond with each stitch, along with its common abbreviation.

The most common Tunisian crochet stitch is the Simple Stitch (tss). It’s symbol can be either just the vertical bar (|), or that same bar with a tilde (~) on top. The tilde signifies that the stitch is for Tunisian crochet.

In Tunisian crochet, there is also the concept of an “extended” stitch. These are usually abbreviated by adding an “e” to the beginning of a stitches base abbreviation. Occasionally, you will see an extended simple stitch abbreviated with simple tes.

All Tunisian extended stitches are all constructed the same way. You begin by working any of the basic stitches (tss, tks, trs, tfs), then followed by 1 chain (ch) before making the next stitch.

This extra chain you make before moving on to the next stitch isn’t closing or adding any loops on the hook. After making the basic stitch, the extra chain will go through the loop of the basic stitch you’ve just created. You do not add a loop or close (i.e. remove) any loop from your row. The stitch count per row remains unchanged.

The only difference is that your new extended stitch is now taller by a single chain. A considerable benefit of using an extended Tunisian stitch is that the fabric should not curl as much as one made without.

EasyCrochet has a handful of awesome and free Tunisian crochet patterns. I think the easiest one to create as a beginner would be our Tunisian scarf pattern. It only uses the simple stitch (tss), and should be a fantastic way to learn the basics of Tunisian crochet.

You can also view our archive of all Tunisian Crochet patterns.

We’ve come across a few other questions that regularly pop up.

Can you use a regular crochet hook for Tunisian crochet?

Sort of. Remember how the added length of an afghan hook is because it needs to hold all those loops? Well, you’d be limited to a tiny project because most regular crochet hooks are around 6-8″ long.

You would also have to be careful that the stitches (loops) don’t slide off the end of your hook, since there won’t be a stopper at the other end. You also have to ensure that the shaft of your regular crochet hook is all one width. Ergonomic hooks won’t work here.